Four Dolphins Got Trapped In A Canal. A Human Chain Formed To Help Get Them Out

Four Dolphins Got Trapped In A Canal. A Human Chain Formed To Help Get Them Out
HC


Four Dolphins Got Trapped In A Canal. A Human Chain Formed To Help Get Them Out


More than a dozen people formed a human chain to guide four dolphins out of a St. Petersburg canal and back into Tampa Bay. 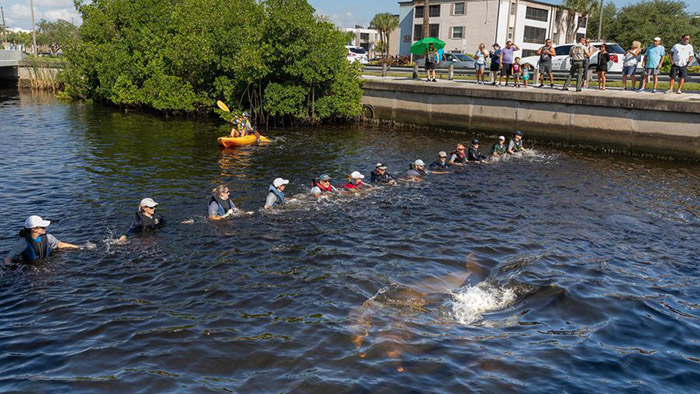 
Two mothers and their calves swam into the canal and seemed to be trapped.


Officials with the Florida Fish and Wildlife Commission believe the dolphins were scared of swimming under the bridge.


“Using a human chain to create a visual barrier, the dolphins were able to overcome the canal bridges, which were believed to be perceived as obstacles,” Clearwater Marine Aquarium said in a statement.


Watch the video of the rescue below.

HCMay 27, 2020
Read More
Scroll for more
Tap
School Custodian Comforts Student With Autism In Loud Cafeteria
Bikers Stop At The Lemonade Stand Of A Girl Whose Mom Helped Them After A Crash
Do NOT follow this link or you will be banned from the site!