Taking a jab at the ‘Umbrella’ singer’s cover shoot for Vogue, the rapper says on Twitter, ‘I want Rihanna to get another nose job, lose weight and intimidate me the way she did before.’

AceShowbiz –
Not everyone is a fan of Rihanna‘s cover shoot for Vogue. Azealia Banks is among those people, and she isn’t afraid to let her feelings known even if it means she has to face the wrath of the R&B singer’s loyal devotees.

Taking to Twitter, the “Anna Wintour” rapper said that the cover “is not cute or pretty.” She then went on saying, “Wtf is this makeup. I’m pissed her ethnic rhinoplasty wore off. …I want Rihanna to get another nose job, lose weight and intimidate me the way she did before.” Azealia added in a follow-up tweet, “I want the skinny euro centric sex kitten back.”

It appears posting two tweets to express her disappointment over the magazine cover wasn’t enough for Azealia because she later took another jab at Rih, “Watching her fall from euro and negro to having spent years belittling me makes me want to look more euro. In a strange way, Rihanna’s proximity to whiteness was always what made me love her and made scared of her. Now that she looks black I hate her.”

“Now that she looks more like the version of me she used to s**t on…. I hate her,” the female emcee concluded her rant. 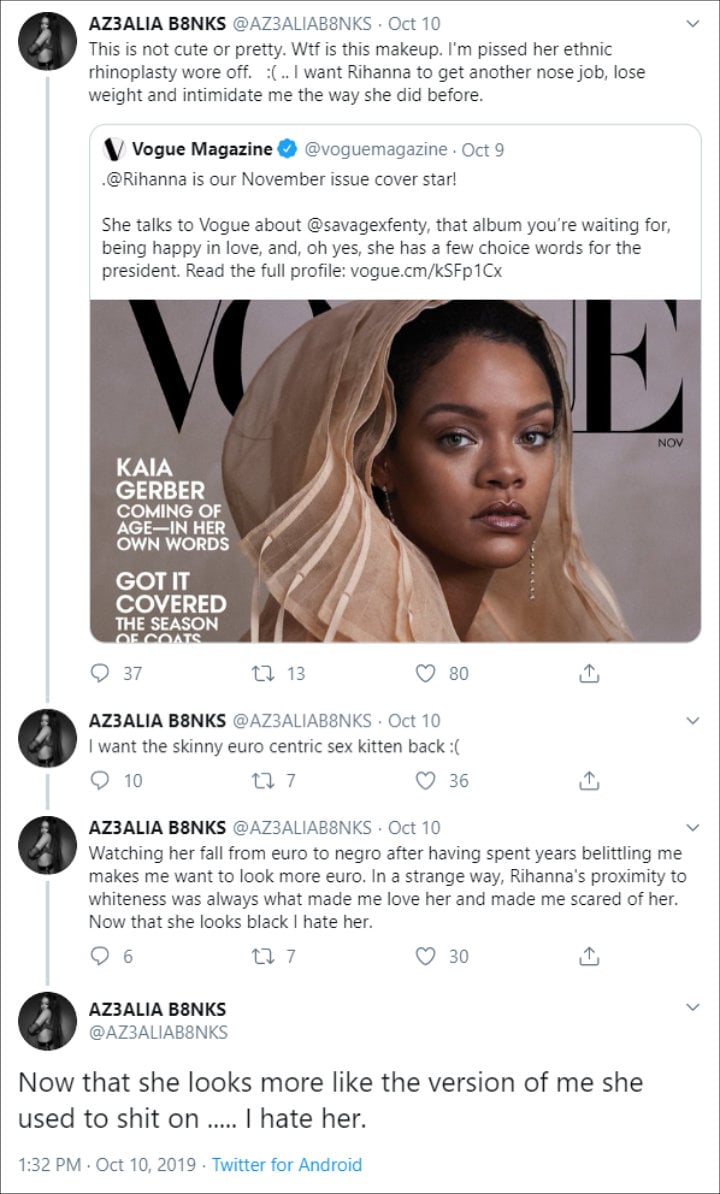 Azealia Banks took a jab at Rihanna over her Vogue cover shoot.

Rih hasn’t responded to Azealia’s jab, though a lot of her fans have already come to her defense. “Girl go pay your bills and leave Rihanna alone,” someone told her, with another saying, “Imagine being pissed that a woman of color isn’t European or rail thin…” One other wrote, “Go play with yo chicken! Shut up and get yo teeth straight.”

“Stop assaulting us with your delusional takes and get a diary,” an individual blasted Azealia. On the other hand, one person defended Rih by saying, “I like what she’s doing now, she feels more authentic and also she’s grown and wants to be that way.” And when Azealia responded, “No I think she looks country and frumpy as f**k,” the said user told her, “And that’s her business.”

Barack Obama Applauded by Celebrities After Condemning Violence Amid Riots

Faith Evans Arrested After Having a Row With Husband Stevie J

Michael B. Jordan and More Stars Join Protesters – Find Out Who Gets Beaten Up and Who Gets Arrested

HCMay 30, 2020
Read More
Scroll for more
Tap
Designers Clamoring to Ask Naomi Campbell to Intentionally Trip on Runway After Her Infamous Tumble
Ryan Phillippe Pays Hush Money to Settle Assault Lawsuit With His Ex
Do NOT follow this link or you will be banned from the site!